Every now and then, a developer will put out a new script or extension for After Effects that could be extremely useful for a host of After Effects users. There are plenty of extensions that serve a very specific purpose for a specific user, but the broad base extensions are a little more rare. 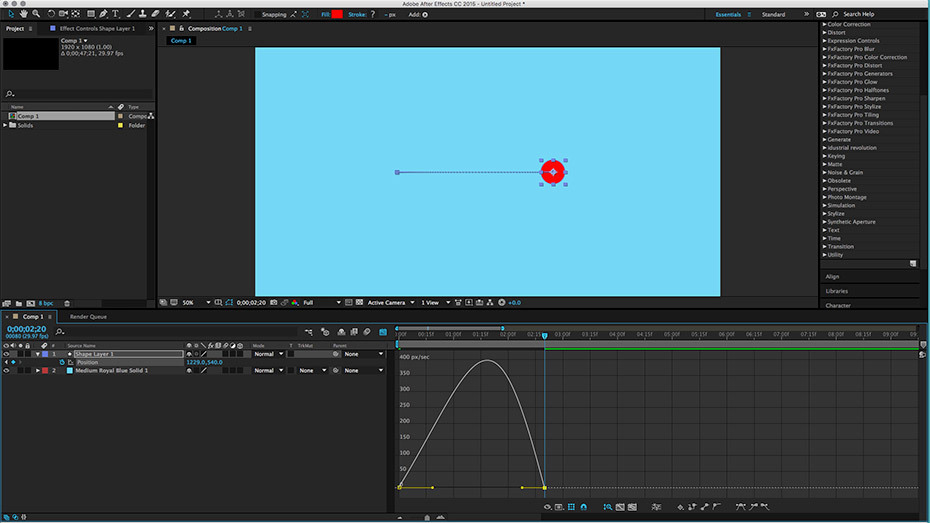 Beginner Tip: The graph editor can be accessed from the timeline and will show the curves between two keyframes in an animation. You can get a basic primer on animation curves from the free Khan Academy course on animation in partnership with Pixar.

A user can manipulate the curves by hand, pulling and moving the handles at the end of the curves. This will alter the speed and force of the animation.

The whole thing is very important for creating convincing animations, but it’s also confusing and a bit hard to get a “handle” on. See what we did there?

So, this is where Flow comes in. Flow is essentially an animation curve preset tool. Let’s take a deeper look.

First off, Flow is an extension which means that it comes with a dockable panel, and the developers took the time to make a very lovely and useful panel. It’s broken into two sections, a curve editor, and a curve library. A simple draggable bar in between lets you show as much or as little of each section as you want. And responsiveness has been built in so that the layout looks good wherever you place the panel.

The graph editor works a little like the built in graph editor for After Effects, but with some key improvements. The biggest of which is hotkeys to make things more efficient and to bring symmetry to your curves in an easy way.

For example, pulling on a handle while holding Shift will snap the curve to the floor or ceiling. Holding down Control will lock the length of the handle. Alt will lock the angle, and Control + Shift will move the handles symmetrically. This is a huge time saver.

The bottom of the panel shows the details of the curves bezier values for those interested, but we suspect most people will just get used to using the visual references for their curves.

While this updated curved editor may be enough to make Flow a worthwhile purchase, it’s not the killer feature.

The killer feature of Flow is the curve preset library, and user libraries. Flow comes with 25 curve presets built in. This means you can simply click on one of the presets and your curve will automatically take that shape. 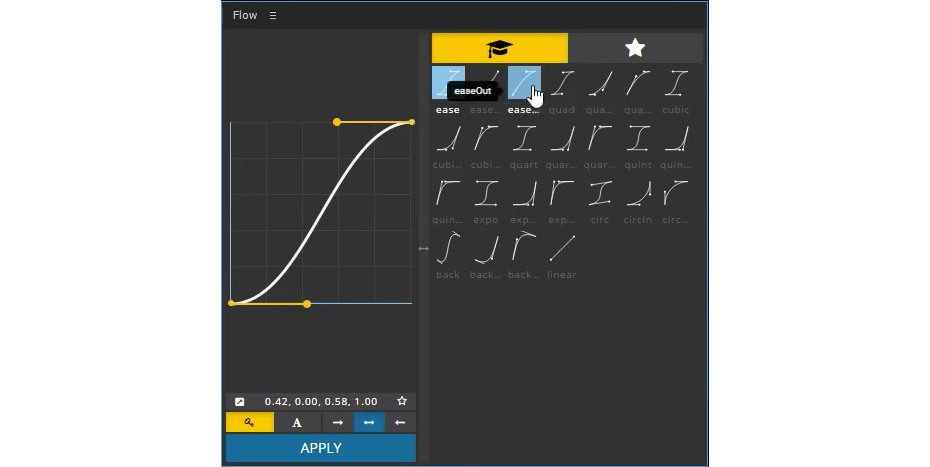 If you are consistently using an ease in and out with a certain influence, you can just click that curve in the library and do nothing else.

The 25 presets are great and helpful, but Flow is infinitely more customizable with user generated libraries. Any user or designer can create their own curve presets and export them. Then you can import them for your own uses. We could easily see big name designers exporting Flow libraries and sharing some of their techniques with colleagues.

This means, you too can create and save your own curve presets for things that you use often. Then you can export that library and share with coworkers to make sure you are using a consistent animation style across a project.

There are a few more advanced features worth noting for some users. The bezier values can be copied and pasted. This means if you were to get values from somewhere else like a web designer, you could paste them in to create similar curves.

And you can also turn on expressions which are more complicated but will give you slightly different results in your curve editing.

All in all, Flow seems to have packed in a lot of features to make curve editing easier, smoother, and more efficient. There are valuable user cases for just about every level of After Effects user. And at $30 for a license (with discounts for multiple licenses) we suspect it will be a no brainer decision for many users.

The addition of importable and exportable user libraries will no doubt help spread the use, as users feel compelled to purchase Flow in order to use a library that they need for a project.

Here’s a quick video of the basic Flow interface from the creators.

It’s currently compatible with After Effects CC 2015 and 2014. And it can be purchased from aescripts + aeplugins. There is a free trial as well if you want to try before you buy.

If you give Flow a try, let us know how you like it in the comments below.